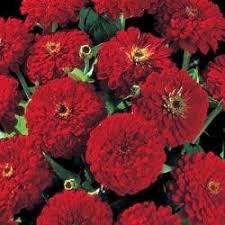 Unfortunately, in our quest for the perfect zinnia, we may face certain problems along the way.  Here is some pratical information on these basic problems.
Skinny, Spindly Seedlings Need More Light or Need Pinching
Zinnias need many hours of bright, direct sun to flourish. If they are at all shaded they are forced to stretch to reach the light, causing them to develop thin stems. If you are growing seedlings indoors under lights, adjust the fluorescent lights to remain only 3 or 4 inches above the seedlings as they grow taller. To encourage thick, sturdy stems and compact plant shape, pinch the growing tips off of zinnia seedlings at least twice before the buds begin to form. This causes them to branch and grow denser. Dwarf varieties have naturally denser shapes. See Starting Plants From Seed and see Seed Starting Supplies and Equipment. Foliage Curls, Puckers, Turns Yellow Due To Aphids
Aphids are about the size of a pinhead and have soft, pear-shaped bodies. They may be green, brown or pink. They tend to cluster on tender, new growth on zinnia stems and on the undersides of young leaves. They suck juices from plant cells, causing foliage to curl, pucker and turn yellow. Often the leaves and blossoms become stunted. Sometimes ants are visible, crawling along plant stems and foliage, attracted by the presence of the sticky honeydew secreted by aphids as they feed. If aphids are on plant tips, simply pinch them off and discard them in the trash. If they have infested a lot of the foliage, spray them with commercial insecticidal soap according to label instructions. Be sure the soap spray contacts the aphids directly.
Click here for more information on Dealing with Aphids.

Leaves Spotted, Discolored May Mean Mites
Mites are about 1/50 inch long, barely visible to the unaided eye. Related to spiders, they have four pairs of legs, piercing-sucking mouthparts and very compact bodies. They may be yellow, green, red or brown. They suck juices from the leaf tissues, draining their chlorophyll and injecting them with toxins. Usually their damage is most visible on the upper leaf surfaces of the lowest leaves on the zinnia stem. They are stippled with small yellow dots or red spots. Leaves and adjacent stems are often distorted or swathed in fine webbing. Spray affected leaves in the late afternoon with insecticidal soap according to label instructions. Pull out and throw away any zinnias that are fully infested so that the mites do not spread to other plants. Take care not to transfer them to other plants on your hands or on tools. Click here for more information on

Holes Are Chewed In Leaves And Flowers By Japanese Beetles
Adult Japanese beetles are 1/2 inch long. They have distinctive shiny metallic green and copper-brown wing covers. As larvae (grubs) they are inch long, plump, grayish-white worms with brown heads which lie curled just below the surface of the soil over the winter. They emerge in mid summer as voraciously hungry beetles and cluster on plant foliage. In no time they can skeletonize a leaf so that only its veins remain.

Begin to handpick any beetles as soon as you spot them. Drop them into a jar of soapy water. If they are overwhelming your zinnia planting, spray the beetles, leaves and stems with a pyrethrin/pyrethrum insecticide product as directed on its label. For long term control of chronic Japanese beetle problems, spray your lawn (where they lay their eggs) with a predatory nematode product as directed. These microscopic roundworms are packaged as a powder to be mixed with water. They ride the moisture into the soil and seek out grubs to lay their eggs in, killing them before they mature into beetles.
Click here for more information on

Leaves And Roots Are Chewed By Various Beetles
Asiatic garden beetle larvae sometimes feed on zinnia leaves and flowers. Adults are velvety chestnut-brown, nearly 1/2 inch long, resembling Japanese beetles. They lay their eggs in the soil at the base of the plants, where the newly hatched grubs eat their roots. Black blister beetles also may attack zinnias. They are cinnamon brown and 1/2 inch long and their larvae also attack plant roots. Control these beetles the same way you deal with Japanese beetles. Be sure to wear gloves if handpicking blister beetles because they can cause blisters on bare skin. There are, as yet, no traps for these beetles. They are less likely to congregate in the numbers that Japanese beetles do.

Pale Spots On Foliage Signal Leafhoppers
Redbanded leafhopper and six-spotted leafhopper may attack zinnias. Leafhoppers are often strikingly colored green, brown or yellow, blunt-profiled bugs. About 1/4 to 1/3 inches long, they are wedge-shaped, holding their wings in a rooflike position above their bodies. They’re very active and move sideways or hop suddenly when disturbed. Nymphs and adults suck juices from leaves, buds, and stems. Some species may spread virus diseases such as aster yellows. Affected leaves are finely mottled with white or yellow spots. They eventually dry up, shrivel and drop off. Plants are weakened. Honeydew from the insects’ feeding may give foliage a glazed appearance and foster growth of sooty mold. Spray insects with insecticidal soap or a pyrethrin/pyrethrum insecticide product as directed on the product label.

White Powder Coating Leaves Is Powdery Mildew
Later in the summer zinnia foliage and flowers are likely to develop an ashy gray coating. This is a fungus disease which develops in hot humid weather. Typically it shows first on the lower leaves, especially in situations where plants grow close together so air circulation is reduced and humidity builds. Many yardeners simply ignore it, as it does not harm the plant. It just looks unattractive. Control the spread of the mildew by spraying unaffected leaves with garden sulfur fungicide according to label directions. Look for mildew resistant varieties such as ‘Rose Pinwheel’ and plant zinnia seedlings farther apart. Click here for more information on Dealing with Fungal Disease.

Brown Spots, Sores on Flowers Is Caused By Stem Blight
Blight is caused by a fungus that causes small reddish brown spots with gray centers to form on zinnia flowers. Sometimes dark brown cankers form on their stems. Cut off affected flowers and discard them in the trash. Keep the area around the plant clear of weeds and dead plant debris. If blight proves to be a chronic problem in the area, spray healthy zinnias plant surfaces with a garden sulfur fungicide as directed on the label.

Spindly Shoots; Foliage Are Yellowed, Curled By Virus Diseases
Various diseases caused by viruses occasionally attack zinnias. They are usually spread by insects. The plants may show curled, distorted, mottled foliage, they may be stunted or deformed, wilting, turning yellow and then dying. Sometimes flowers are a sickly yellow green or fail to develop at all. There is no cure for plant viruses. However, by controlling insect pests like leafhoppers, transmission of these diseases is reduced. Dig up infected plants and put them in the trash. Do not compost them. Keep the garden area clear of weeds and debris that may harbor infection. To avoid spreading the disease disinfect garden tools by dipping them into a solution of 1 part household bleach to 3 parts hot water.